Call us!
Email us

The first time I approached Redux I was overwhelmed by the concepts around it. Because of that, I didn't continue studying more about Redux, until months later when the project I worked on required it. I want to share a quick intro to Redux with you, trying to simplify the concepts around it for an easy understanding.

The "problem" that Redux solves

Redux is "a predictable state container for JavaScript apps" - in other words, it helps you keep the state of your React app organized and centralized. It defines a flow around the way the components read and consume the state as well as the operations to be executed to update such state. That becomes helpful because managing the state only with React can become messy sometimes.

In the example above you can see the high dependency between those components. They're arranged on a "pyramid structure" where the components at the higher levels depend heavily on the components at the lower levels. Components "c" and "d" will not only depend on their parent to receive the necessary data, but they will also be updating the state each on their own / and probably their own way. That can likely lead to inconsistency and make it harder to track down where the state changed (in case of bugs).

Redux cuts off the dependency between components on that "pyramid structure", and also provides a consistent way to update the state on one single place.

The core concepts of Redux

Redux is composed of four concepts:

Those four things interact in a consistent / "one way only" flow: 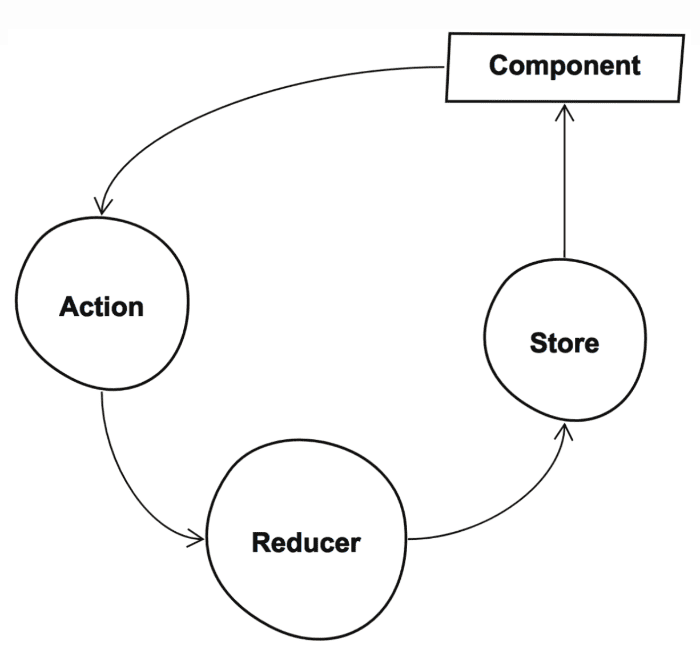 Let's see what is each of those concepts is about and a quick implementation with them.

Actions are plain JS functions that will be triggered by the React components. Let's say for example that in your React component the following field and button are being exposed:

Assuming the user filled the field, when the user clicks on the "Add" button you'll call your Action. In the Action you can perform any extra operation you need to perform, and then pass the data you want the Reducer to read (so that it updates the state). In this case, the data you'll pass to the Reducer is the todo itself.

Let's see what's this Action's code about. As stated before, the Action is nothing more than a plain function called addTodo which receives a parameter called todoLabel. Such function returns (what will be received by the Reducer) an object that needs to comply with a "convention":

The field names ("type" and "payload") don't strictly need to be those as you'll find when you see the Reducer, but I highly recommend using those since it's super common to see those being used in general.

Let's see what happens in the Reducers:

The way to define Reducers in Redux is as plain functions. The Reducer will receive two parameters:

Now that we got an idea what a Reducer is about, let's get a grip on the implementation:

The Reducer needs to set a default value to start with, it also needs to be able to return something by default. That's why the state parameter of the function is set to INITIAL_STATE initially. And also that's why there is a default statement at the end of the swicth statement.

Tying up what we saw before about the Action and what we have here about the Reducer, we can see that:

That's pretty much the flow in a Reducer, what happens next is that Redux takes whatever data the Reducer returns and updates the Store with that data.

The Store holds the Redux app state, which will feed the React components. In that way, after a Reducer updates the Store with a new piece of state, a component depending on that piece of state will re-render and show the new data from the Store. This completes the Redux flow:

It's worth to mention that the Store can be composed of one or more Reducers.

We've been talking about the Actions being triggered from the components, so it's worth to mention an arrangement that Redux requires on the components to properly hook them Redux:

Let's see the implementation of those two types of components for our example.

This stateless component is receiving the list of todos as well as the addTodo Action to be called when the user submits a new todo.

The container component on the other hand:

This container component connects the state and the actions to the stateless component. It does that:

The last thing we need to do is wire the container component to the Store, the implementation for that will be the following:

You can find a working example based on these code snippets here.

I guess you may still be thinking there are many parts to be combined on Redux, but you can see that it's only three main concepts and the last one (the wiring) is all about implementation. In my opinion, as long as you dominate the concepts then the wiring is going to be easy because you understand what is going on.

If you haven't tried Redux I encourage you to give it a try! I've found it very beneficial!

Quick note: React 16 officially introduced the Context API and the useReducer hook, those provide alike functionality as Redux. We plan to launch a blog post about those soon - stay tuned!